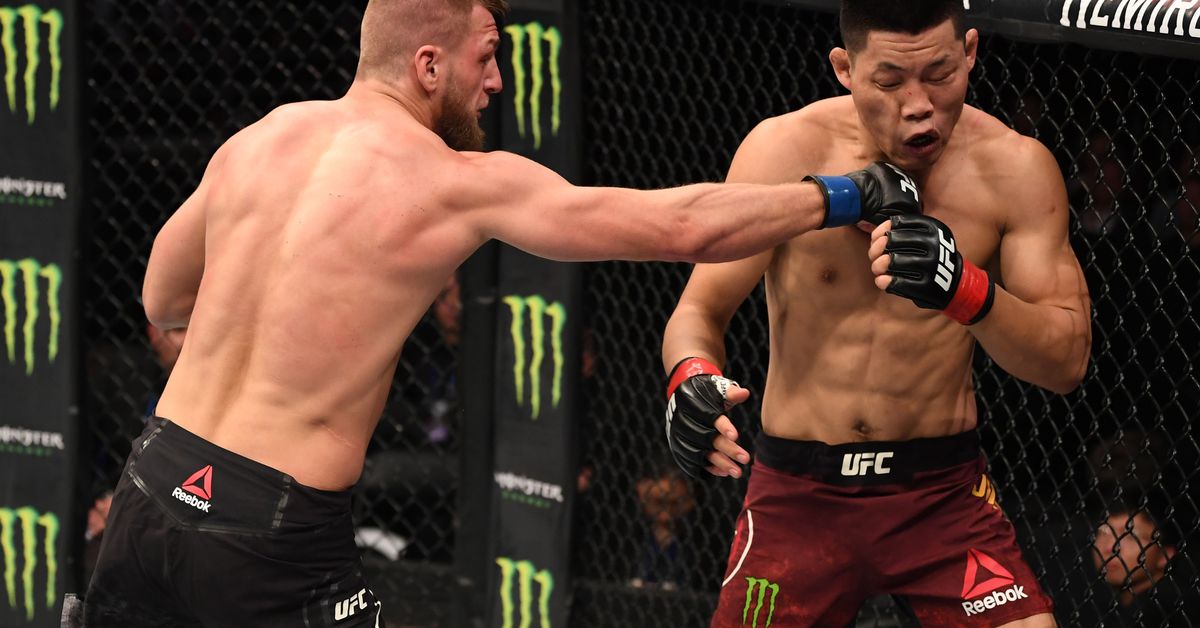 Following his big break of getting signed to the UFC last year, David Zawada is still in search of his first promotional win. The veteran of the European scene is looking for that to change when he competes at UFC Moscow this weekend, so he can begin climbing the welterweight ladder.

Zawada (16-5) last fought almost a year ago in a losing effort to Chinese standout, Li Jingliang, but it was a competitive affair. Jingliang is known for his fast-paced, aggressive style but it was Zawada who hurt and dropped his adversary early with a right hand, before trying to inflict more damage from the top position.

However, from the beginning of the second round, Jingliang managed to feel his way back into the contest by scoring a series of solid punches while constantly keeping the pressure on the German. Jingliang landed many punishing leg kicks, which hindered Zawada’s movement and secured the opening for the fight-ending blow. Zawada collapsed to the mat when Jingliang uncorked a side kick to the body, thus securing the victory. The KSW alum acknowledged that he had the chances to get his own hand raised but he will take the lessons learned from the bout to grow as a martial artist.

“In the fight against Jingliang, I was pleased with the way I started,” said Zawada. “I found my timing almost immediately but when I dropped him, he recovered quickly. Looking back, I rushed too much in search of the finish which caused me to use up too much energy. During the second round, I began to slow down and Jingliang found his rhythm so he took over the fight. I couldn’t react to his leg kicks even though I could see them coming as my body was moving too slowly.”

“Overall, that fight was a great experience for me and I know that if I fought smarter, I could have finished him.”

That fight pushed Zawada to 0-2 in his UFC career and leaves him in dangerous territory with the promotion constantly looking to evolve its roster. However, in Danny Roberts and Li Jingliang, he has faced two skilled fighters and wasn’t totally dominated by either. In fact, both of those bouts were taken on short-notice so the 29-year-old hasn’t had ideal preparation up to this point in his UFC career. Zawada is delighted that has changed in the lead up to this weekend’s fight and feels he is now in the position to show fans what he is truly capable of.

“People have only seen a tiny bit of what I can do in the UFC because I have taken fights with minimal time to get ready,” explained Zawada. “This time, I have been much smarter and have had a full camp for the first time since I joined the promotion. I’m ready to show everyone what I can do this Saturday. I am not feeling any extra pressure after losing my last two but I know that I have to win this fight.”

Zawada trains out of UFD Gym in Dusseldorf, Germany which is quickly becoming one of the standout training facilities in Europe. He works alongside KSW champion, Roberto Soldic, Erko Jun, Antun Racic and his brother, Martin Zawada at the gym. The welterweight believes that the team have been so successful recently because everyone is helping each other to elevate their game and no one shies away from any challenge. He has also put in work at MPC (More Power Concepte) with his strength and conditioning coach, Christian Mohr, to ensure he is in peak shape going into this pivotal bout.

He will welcome Khabib’s cousin, Abubakar Nurmagomedov (15-2-1), to the Octagon on the preliminary card in Moscow. Nurmagomedov reached the welterweight playoffs in the PFL 2018 season where he drew to UFC veteran, Bojan Velickovic, but couldn’t advance to the finals because of a hand injury. The man from Dagestan is coming off of a suspension following his role in the infamous brawl between Conor McGregor and Khabib.

This fight will mark the third different territory that Zawada has fought in during his three-fight UFC run which he likes as it puts him outside of his comfort zone which is when he believes he grows. Zawada has finished 11 of his 16 victories due to strikes and thinks that this upcoming clash will be entertaining for the fans.

“Abubakar is a really good fighter,” discussed Zawada. “He is a great wrestler but his striking is good as well. I expect he will want to take me down and make me tired on the ground. However, I am prepared for that and am ready to exploit any chances he gives me on the feet. It is no secret that I like to battle it out in the stand up which is what I will aim to do in Moscow in-front of his supporters.”

UFC Fight Night: Magomedsharipov vs Kattar prelims can be viewed on Saturday evening at 5pm GMT on BT Sport 3 in the UK and Ireland. Fans in the US can watch from 11 a.m. ET on ESPN+.