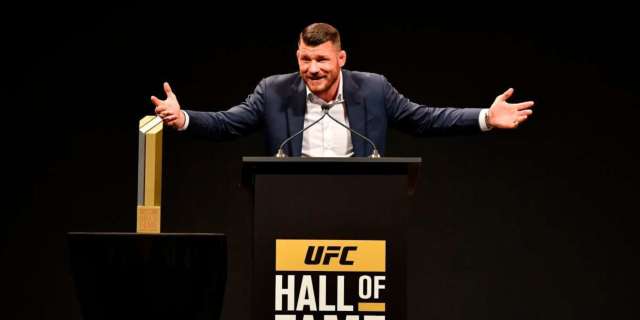 UFC legend Michael Bisping just revealed why he wears sunglasses all the time. While being interviewed on the Believe You and Me podcast, Bisping, 40, took out his fake eyeball and then said, “That’s why I used to wear f***ing sunglasses, baby boy! The reason Bisping has a fake eyeball is he suffered a detached retina in his right eye in a match against Vito Belfor back in 2013. Bisping lost that match but he went on to fight for another three years before calling it a career.

“My vision (in my right eye) was pretty much non-existent since 2013, Bisping said when talking about his eye, per The Sun. “I was just about able to scrape past the medicals. It was definitely touch and go. I was always terrified of doing a full training camp, then being turned away by the commission doctor.”

“It was difficult. To pass the medical test, you’ve got to have 20-200 vision, which is classed as clinically blind anyway, so it’s not very good – it’s not a very hard mark to pass. Some days I could, some days I couldn’t. But fortunately, I was just able to scrape by.”

Michael Bisping is a legend. pic.twitter.com/fg1TG4SwnO

Bisping is considered one of the best in UFC history. He made his UFC debut at UFC 66 in 2006 and defeated Eric Schafer. But it would take Bisping 10 years to win his first UFC championship, defeating Luke Rockhold for the middleweight title at UFC 199. He lost the title to George St. Pierre the following year.

When Bisping retired from UFC, he left with the second-most wins in league history with 20 and he was the first-ever British UFC champion. Bisping was inducted into the UFC Hall of Fame this past summer.

“Everybody that I fought over the years, I know I talked a lot of s—,” he said, during his Hall of Fame speech via UFC.com. “But when it’s all done, it’s done, it’s over.”

“This is a magnificent sport and it’s because of you guys. There are no other fans like mixed martial arts fans in the world. The attention to detail that you have — we wouldn’t be here now if it was for you people.”

“To everyone that I fought and everyone fighting tomorrow night, Clay Guida, Diego, Franklin, Rashad — give it up for Rashad — everyone that has the balls to step in there, you have my respect forever.”

HOLD UP! Make sure to subscribe to GroupChat, PopCulture.com’s official reality tv podcast! Check it out by clicking here or listen below.

Hit play to listen to GroupChat’s new Episode 6 where we’re talking Kylie Jenner and Travis Scott’s epic split, some must-hear ‘Dancing With the Stars’ updates, ‘The Masked Singer’ and all kinds of conspiracy theories and a sad (or not so sad?) ‘Bachelorette breakup! Don’t miss any of it and tap that subscribe button so you don’t ever miss an episode!