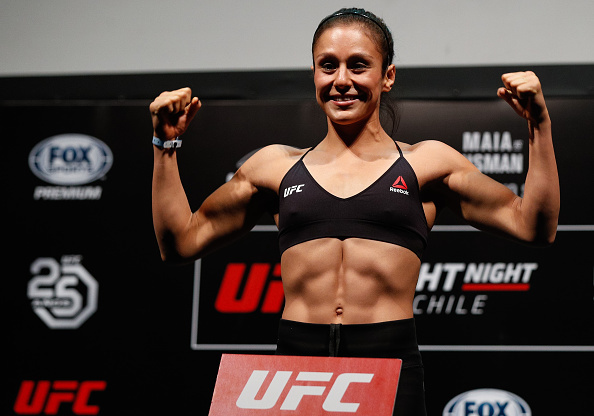 SANTIAGO, CHILE – MAY 18: Alexa Grasso of Mexico poses on the scale during the UFC Fight Night weigh-in at Movistar Arena on May 18, 2018 in Santiago, Chile. (Photo by Buda Mendes/Zuffa LLC/Zuffa LLC via Getty Images)

UFC 246 goes down this Saturday evening and with all the hype surrounding the main event between Conor McGregor and Donald Cerrone, there is one main card fight flying well under the radar. A women’s strawweight bout between Claudia Gadelha and Alexa Grasso has not been talked about enough.

The number six and number eleven ranked fighters in the women’s strawweight division will fight second on the pay-per-view portion of the fight card. If you are looking at the best UFC betting sites, then you will see that this fight is as close as it comes to oddsmakers.

Gadelha vs. Grasso is as close a fight as it gets

Most USA Sportsbooks have Gadelha sitting at -105 and Grasso -115. It is very uncommon for two fighters to be sitting as betting favorites.

After vying and losing to Joanna Jędrzejczyk for the title in 2016, the Brazilian has gone 4-2. Gadelha (17-4) has bounced between wins and losses over the course of her last four bouts. Most recently she defeated Randa Markos via decision at UFC 239 this past July.

Grasso (11-3) came into the UFC in 2016 as an undefeated prospect and has since gone 3-3 in her six Octagon appearances. In her most recent outing, she earned ‘Fight of the Night’ honors in a majority decision loss to former strawweight champion Carla Esparza.

A victory for either female will propel them up the strawweight rankings and push them closer to title contention. Gadelha vs. Grasso is a fight for the fans and a fight that must be watched.

UFC 236 goes down on January 18 from the T-Mobile Arena in Las Vegas, Nevada.

Stay tuned right here at MMA Sucka for more live streams as well as videos highlighting the top fighters, commentators, coaches, promoters and other names in MMA and combat sports. We also bring you great offers on the latest MMA products and merchandise. You can also subscribe to our YouTube channel for regular updates and all the latest fight news. You can also check out our sister site, at TheFightBuzz.com for the latest from the world of MMA and other combat sports.