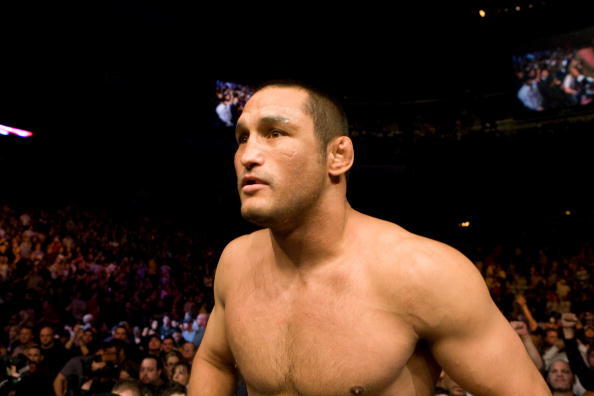 We’re back with a new Today in MMA History article. Since COVID-19 has cancelled most MMA events, MMASucka has decided to take a look at some fights from the past. Today’s article features a two time US Olympian and a legendary Jiu-Jitsu black belt. That’s right, we are talking about Dan Henderson knocking out Renzo Gracie at PRIDE 13.

Gracie started with Pride back at their first event in 1997 where he and Akria Shoji fought to a draw. Following the draw, Gracie stacked up four straight wins over Sanae Kikuta, Alexander Otsuka, Watura Skata and Maurice Smith. But then he hit a rough patch losing to Kiyoshi Tamura and Kazushi Sakuraba. Hoping to get back on track Gracie shifted his focus to a meeting against Henderson.

Henderson had already started making a name for himself in the MMA world with wins over Antonio Rodrigo Nogueira and Renato Sobral before joining Pride. His first fight with the promotion came against Wanderlei Silva in which he lost a unanimous decision. Fast forward a couple months after he lost his promotional debut Henderson found himself facing off against jiu-jitsu royalty in Gracie.

The fight started with both fighters trying to find their range, however you could clearly see Henderson’s wrestling was going to be a factor. Gracie would keep trying to shoot for a take down but with Henderson’s Olympic level wrestling he was able to sprawl every time. After some leg kicks were exchanged Gracie shot for another take down. Henderson anticipated the take down and countered with a right hook which turned out to be the difference maker. The right hook knocked Gracie out and Henderson gave him one more hammer fist for good measure to end the fight at 1:40 of the first round.

You can watch the entire fight in under 10 minutes on UFC Fight Pass.

Gracie would go on to defeat Michiyoshi Ohara before losing three straight to Shungo Oyama, Carlos Newton and B.J. Penn.  Following those losses he defeated Pat Miletich, Newton and Frank Shamrock which set him up with his one and only fight with the UFC. UFC 112 saw Gracie take on Matt Hughes, Gracie fared well in the fight until Hughes was able to put him away in the third round to win by TKO.  Following the loss, Gracie took 8 years off before returning to the cage in 2018 for ONE- Reign of Kings where he defeated Yuki Kondo in the second round with a rear naked choke.

After this fight Henderson continued his legendary career. He would collect wins over names like Fedor Emelianenko, Vitor Belfort, Rich Franklin, and Michael Bisping. He also had wars that he lost against names like Anderson Silva, Quinton Jackson, Rashad Evans and Daniel Cormier. Throughout his career Henderson picked up a few championships. He was the Pride middleweight and welterweight champion, he was the Strikeforce heavyweight champion but he was never able to earn a championship with the UFC. Henderson’s last fight came back at UFC 204 where he lost a decision in his rematch with Bisping.