After his win this past weekend against Kelvin Gastelum at UFC 244, Darren Till admitted that he considered faking an injury to get out of the fight. This is something that UFC veteran Diego Sanchez has issued a lengthy rant about.

Till was successful in his middleweight debut at UFC 244, getting past Gastelum by split decision in an uneventful fight. The Liverpudlian’s comments after the fight drew a lot of attention after he talked about how nervous he was entering the fight with Gastelum and even considered faking an injury to get out of it.

Although many respected Till’s honesty in his comments, The Ultimate Fighter season one winner Sanchez put Till on blast, commenting on ESPN’s Ariel Helwani’s Instagram post saying he can’t relate at all to the 26-year-old. 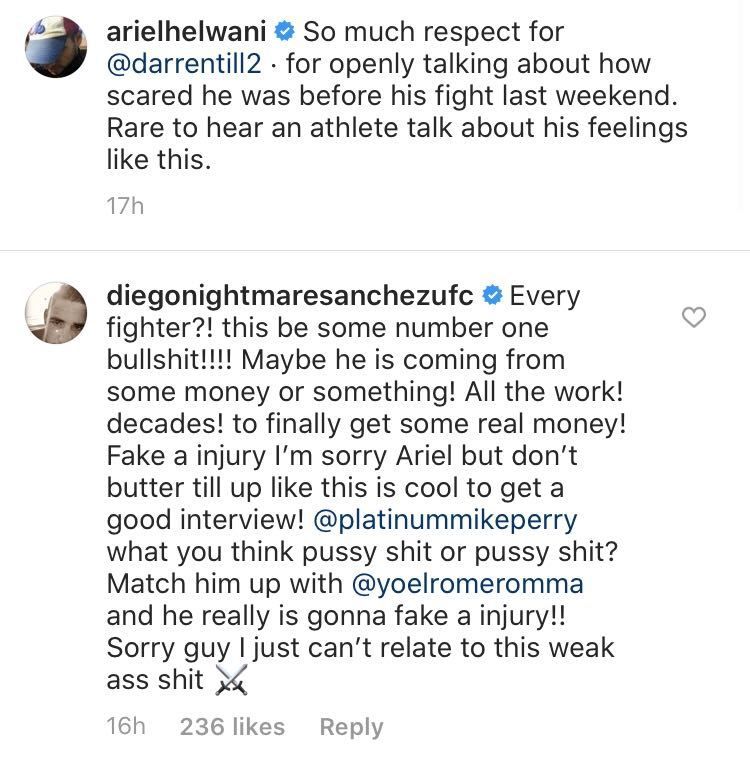 Every fighter?! this be some number one bull—-!!!! Maybe he is coming from some money or something! All the work! decades! to finally get some real money! Fake a injury I’m sorry Ariel but don’t butter till up like this is cool to get a good interview! Mike Perry what you think p***y s—t or p***y s—t? Match him up with Yoel Romero and he really is gonna fake a injury!! Sorry guy I just can’t relate to this weak ass s—t.

Sanchez, who has always had an intensity mentality in and out of the cage, has been fighting in the UFC for almost fifteen years. Starting his career as a middleweight, “The Nightmare” has fought as low as 145-pounds in his lengthy career, but is now fighting at welterweight.