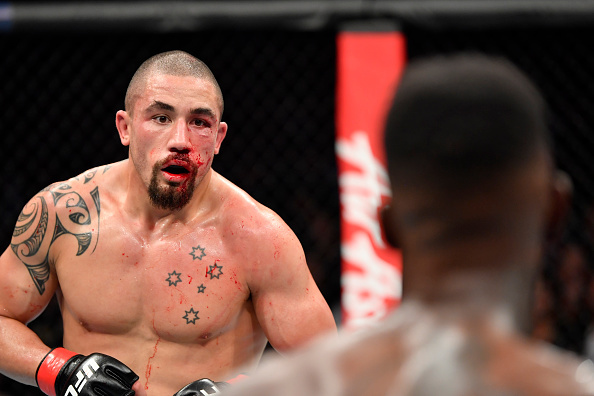 Saturday, October the 6th was supposed to be the night that Robert Whittaker proved himself. After injury forced him out of his last bout, and a razor-close decision win against Yoel Romero, his fight against the rising phenom Israel Adesanya was supposed to be his shining moment. It would be his first title defense- his second war against Romero did not count due to the Cuban missile missing weight. What is “supposed” to happen, however, or what feels right or just rarely does happen, notably in mixed martial arts. The doubts that have been cast upon him since his rise up the middleweight rankings will unavoidably remain. After a close but relatively uneventful round one, Adesanya dropped Whittaker, who was presumably saved by the bell. The knockdown repeated itself halfway through the second round, and with no bell in sight to save him, Adesanya finished the fight landing a few more uncontested strikes before the ref had seen enough. Adesanya is now the undisputed middleweight champion, having one of the greatest year-and-a-halves in combat sports history that wrapped up perfectly. Whittaker, forever the underrated, will inevitably be dismissed even more now that he no longer holds the title.

Robert Whittaker will presumably always be underrated, and even had he won against Adesanya, there is always the casual fan base who would convince themselves that Adesanya is overrated, rather than accept Whittaker’s talents. Go into any UFC post on Facebook (if you dare) about Whittaker and the most popular comments are ones dismissing the former champ- mentioning that he never fights, or that he was gifted a decision win against Romero. There has generally been two purveying views on Whittaker- analysts and hardcore fans generally sing his praises and acknowledge him as severally underrated. On the other end, the common UFC fan has never been too impressed with Robert Whittaker’s achievements.

There had never been more eyes on Robert Whittaker than there were when he was entering the cage against Adesanya. The time to prove himself, at least in the eyes of the common fan, was at that moment, but he came up short. Whittaker looked just a shade off- whether because of bad game planning, wear-and-tear from his brutal past fights, or simply because Adesanya is that good, is up for debate. With his loss to Adesanya, in his home country at the largest stadium, Robert Whittaker’s reign is likely to be forgotten. Superstars are built off impressive wins like the one Adesanya had, which inevitably leads to their popularity casting a shadow over their opponent. Look no further than pound for pound great Jose Aldo, who, in the eyes of the average viewer, was just the fool who ended up beaten in 13-seconds by Conor McGregor. This article serves as a notice to remember Whittaker as the elite fighter he is. Fortunately, at 28, he is far from done, though the question remains how much his two wars against Romero have affected him.

What Could Have Been

Career trajectories can change in a moment. It is hard to say how Robert Whittaker would be viewed had he been able to fight earlier this year against Kelvin Gastelum like intended. One loss is all it takes to lose any glimmer of stardom and success. The same could happen to Adesanya; Paulo Costa, possibly his next opponent who is on a similar but less notable undefeated streak, swears he is going to hurt Adesanya badly. In that case, we can have this article all over again, but replace Whittaker’s name with Adesanya. Such is the life of an MMA fan- the cycle continues.