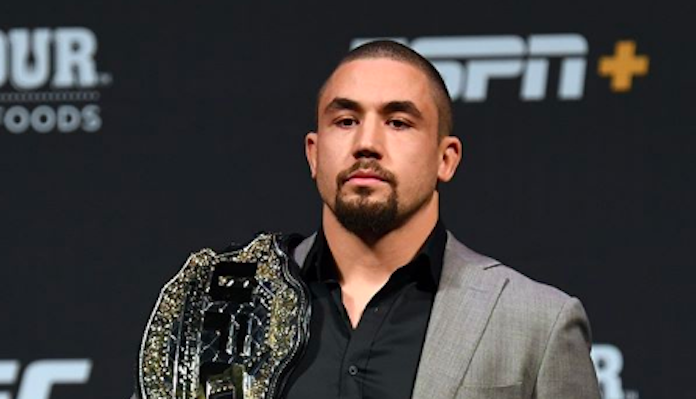 The UFC has targeted an intriguing middleweight bout between Robert Whittaker and Jared Cannonier as well as an exciting light heavyweight matchup between Johnny Walker and Nikita Krylov.

ESPN’s Ariel Helwani revealed the news on his Twitter.

Couple of other fights being discussed for March:

I’m told the latter is all but done, but the former is still in talks because Whittaker really likes the idea of London v Till.

“Couple of other fights being discussed for March: Jared Cannonier vs. Robert Whittaker, March 7. Johnny Walker vs. Nikita Krylov, March 14. I’m told the latter is all but done, but the former is still in talks because Whittaker really likes the idea of London v Till.”

The UFC is reportedly considering booking Whittaker vs. Cannonier in a potential No. 1 contender’s bout at 185lbs for the March 7 card that currently has no venue or location announced. That card, which is expected to be called UFC 248, also features Weili Zhang vs. Joanna Jedrzejczyk for the UFC women’s strawweight title. There are rumors UFC middleweight champion Israel Adesanya could fight Yoel Romero in the main event.

It’s a bit surprising the UFC is considering booking Whittaker against Cannonier and not Darren Till, as Whittaker and Till have gone back-and-forth on social media for months. But perhaps the UFC matchmakers have other plans for Till. Perhaps it will be Till and not Romero getting the title shot with Paulo Costa out and injured.

As for Walker vs. Krylov, that fight is being discussed for the upcoming March 14 card in Brasilia, Brazil. That card does not have a main event yet, but an intriguing women’s strawweight bout between Amanda Ribas and Paige VanZant has been booked for it.

Again, this is a bit of a surprising booking because Walker has publicly called out Chris Weidman as of late. But Weidman may not want to return to the Octagon so soon after suffering a bad KO loss to Dominick Reyes at UFC Boston and he could move down to 185lbs again. If that’s the case, then Walker needed someone else to fight and Krylov looks to be the man for the job.

Do you think the UFC should book Robert Whittaker vs. Jared Cannonier and Johnny Walker vs. Nikita Krylov?