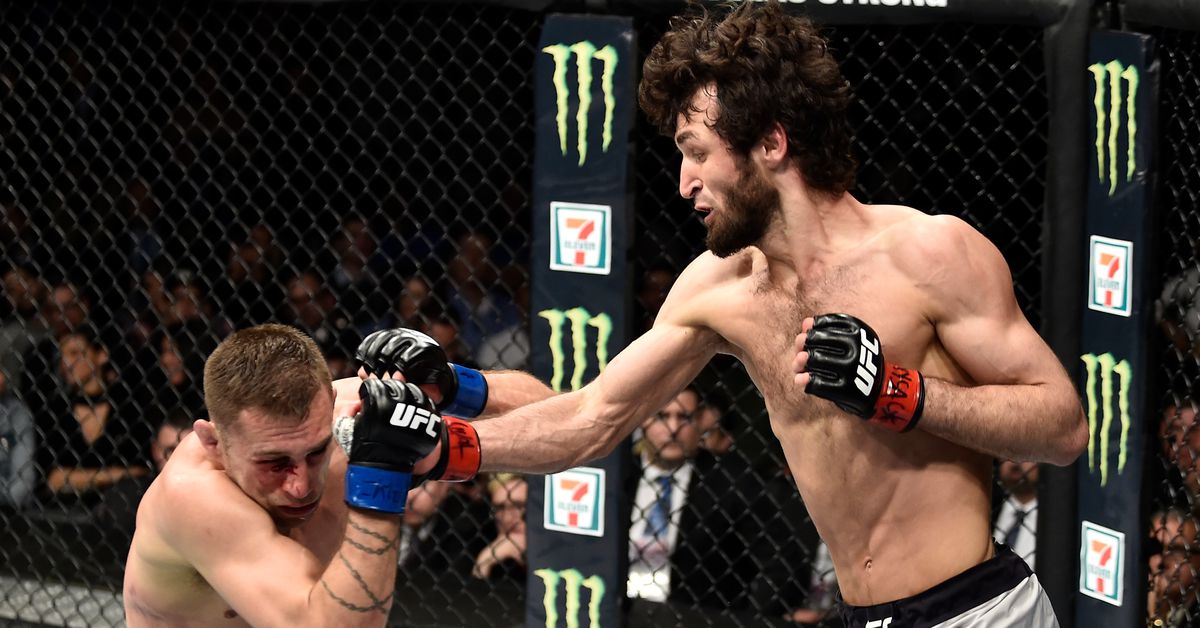 It ain’t “Rocky,” but there is a “Drago” involved.

Ultimate Fighting Championship (UFC) returns to Moscow for the first time since September of 2018 for a Saturday (Nov. 9th, 2019) morning/afternoon of mixed martial arts (MMA) action in Russia.

There’s also a Welterweight slobberknocker between Zelim Imadaev and Danny Roberts to look forward to, plus the immortal Ed Herman against Khadis Ibragimov.

Our usual main card guy made the classic blunder of invading Russia during the winter, so I’m on duty once again. We’ve got our standard “Prelims” duology here and here, plus the weekly gambling advice here.

Let’s see what our fellow superpower has to offer us.

Magomedsharipov remains one of, if not the strongest young prospect the UFC has to offer, but there have definitely been flashes of mortality among his heroics. Namely, he seems to have increasing trouble keeping persistent opponents out of punching range as a fight progresses; both Kyle Bochniak and Jeremy Stephens enjoyed strong third rounds against him, Bochniak admittedly with the aid of Magomedsharipov’s broken hand, and Brandon Davis found a lot of success until Magomedsharipov decided to bring it south.

That’s been the crutch: anytime Magomedsharipov finds himself in trouble on the feet, he has cheat code-level wrestling to bail himself out. What we need to see is what happens when that’s not an option, and Kattar may have the skills to show us.

Kattar has the strongest boxing of anyone Magomedsharipov’s faced so far; only Sheymon Moraes comes close, and he was too busy getting ragdolled for that to be a factor. On the wrestling side, he held his own against a very capable takedown artist in Chris Fishgold, and while we haven’t seen “The Boston Finisher” against that many wrestlers, it’s still a more impressive grappling feat than anything Davis or Bochniak pulled off.

He did get pieced up at range by Renato Moicano, but the Brazilian has a better jab and a more proven ability to fight off the back foot than Magomedsharipov.

This is a far closer fight than the lopsided odds would suggest and I’d pick Kattar were it five rounds. As is, Magomedsharipov once again banks two rounds and survives a late boxing rush to claim a decision.

Well, we’ve finally gotten the Greg Hardy sink-or-swim fight we’ve been clamoring for. Volkov is a cardio machine who regularly lands 100+ strikes per 15-minute fight, a daunting task for a fighter in Hardy whose gas tank has proven terribly unreliable. Hardy doesn’t have the skillset or inclination to exploit Volkov’s traditional weakness of iffy defensive grappling, either, and “Drago” has historically proven able to take a shot from anyone not named Derrick Lewis.

It’s also worth noting that Volkov is exponentially more experienced than anyone Hardy’s faced so far; Juan Adams, whom I’d tabbed as Hardy’s greatest stylistic challenge before their fight, lost his composure and went for a panicked takedown that got him finished right off the bat. Volkov was training for one of the division’s heaviest hitters in Junior Dos Santos and doesn’t figure to be intimidated by Hardy.

This is the part where I acknowledge Hardy’s puncher’s chance. It’s there, of course, just as it would be against anyone in the UFC Heavyweight division. Unless Voklov’s confidence was badly shaken by the Lewis knockout, though, Hardy isn’t likely to find the mark against a more seasoned and technically adept striker, especially since Hardy won’t have his customary reach advantage. Volkov buries him in combinations for either a clean decision or a late stoppage.

Danny Roberts has a nicely rounded game and finishing ability on both the feet and the mat. He also has a worrying tendency to eat whatever power shots come his way; whether it’s the haymakers of Mike Perry or the improvisational lunacy of Michel Pereira, Roberts has neither the defensive aptitude nor the durability to stand up to the Welterweight division’s many knockout artist.

Imadaev, rough debut or no, definitely numbers among them. He’s got hammers in those hands of his and enough technique, speed, and aggression to deliver them to the target. His greatest issues lie in his takedown defense and ability to get off the cage, and considering that Roberts hasn’t initiated the wrestling once in nine UFC bouts, those don’t figure to play a factor in this matchup.

Roberts is on the wrong end of a reach discrepancy against a young, powerful up-and-comer with the tools to recreate Perry’s and Pereira’s efforts. The Russian lands a bomb in the first few minutes to end things dramatically.

This was originally supposed to be Herman against Gadzhimurad Antigulov, the most hilariously over-aggressive grappler in the UFC. It would have lasted less than a round, with the most probably outcome split about 70/30 between Antigulov choking him out or Herman knocking him stupid with a knee once the former’s three-minute gas tank emptied.

This matchup is a little trickier to foresee. Ibragimov is 15 years younger, a legitimate Light Heavyweight as opposed to a Middleweight who can’t cut the weight anymore, and has some legitimately great judo. His UFC debut was anything but inspiring, though; Ibragimov gassed himself out in under a round flailing unsuccessfully at an inferior grappler in Da Un Jung.

As terrible as that was, though, Herman’s age and wear are every bit as worrisome. “Short Fuse” is 1-3 in the UFC at 205 pounds, the sole win coming over the eminently hittable Pat Cummins. He’s not a sufficiently adept striker to make up for his lack of speed, even against a half-baked standup artist like Ibragimov, and he’s never been great at getting out from underneath strong top control artists. If Ibragimov doesn’t fight as moronically as he did against Jung, which the more forgiving part of my brain is willing to chalk up to late notice and Octagon jitters, there isn’t much stopping him from judo throwing Herman at the start of each round and just chilling from there.

Herman has a habit of ruining my plans, so I won’t count him out, but I just don’t think there’s enough left in the tank to deal with the physical disparity.

I remember being excited for Emeev’s Octagon debut back in 2017; he’d beaten “Slava” Vasilevsky, whom I was quite high on, and Anatoly Tokov, who’s currently wrecking shop in Bellator. I’ll admit he hasn’t exactly set the world on fire in his three UFC victories, a lack of momentum not helped by his current 14-month layoff due to injuries and visa issues, but he still looks like a handful for any Welterweight below the elite.

As good as Martin’s looked at 170, where he’s beaten strong grapplers like Keita Nakamura and Ryan LaFlare, his struggles with Demian Maia suggest that he’s in for a rough evening. His kickboxing edge won’t matter much when a guy who’s manhandled Middleweights won’t stop shooting in on his hips, and as strong as Martin is from top position, his bottom game is nowhere near as fearsome.

The entertainment value of this fight is inversely proportional to Emeev’s control of it, which unfortunately for the viewers will be considerable. Martin gives his best effort, touching up “Gorets” for however long it stays on the feet, but it’s all for naught as Emeev racks up minute after minute of control time.

Gamzatov is a quality signing who has heaps more momentum than his Brazilian foe; “Umar” looked to be a strong contender in the PFL Middleweight playoffs last year before suffering an injury ahead of the first round, while Abreu’s two Octagon appearances have seen him lose wide to Magomed Ankalaev and scrape by Sam Alvey via meh split decision.

The more you look into this matchup, though, the more you see going in Abreu’s favor. Gamzatov is just three fights removed from scraping past Rodney Wallace, giving up multiple takedowns before being saved by “Sho’nuff’s” fatigue. He gasses regularly, usually sometime in the second round. He’s a natural Middleweight going up against a guy who weighed in at 235 for a Heavyweight bout last year.

While Gamzatov is the better overall striker, his habit of leading with naked kicks and general lack of fluidity leave him wide open to takedowns, which must be avoided at all costs against a submission specialist of the Brazilian’s caliber. “Umar’s” ace in the hole is the power in his right hand, which is a feasible path to victory considering Abreu’s two professional stoppage losses, but the former was never much of a one-shot artist even against fellow 185ers.

Gamzatov will own this fight as long as it stays on the feet. Unfortunately for him, Abreu won’t let him keep it there. The Brazilian catches an early kick, moves to the back, and scores the upset.

Remember that MMAmania.com will deliver LIVE round-by-round, blow-by-blow coverage of the entire UFC Fight Night 163 fight card this weekend RIGHT HERE, starting with the ESPN+“Prelims” that are scheduled to begin at 11 a.m. ET, then the main card portion that will also stream on ESPN+ at 2 p.m. ET.

To see more on UFC Fight Night 163: “Magomedsharipov vs. Kattar” and the rest of ESPN+’s lineup, check out our comprehensive event archive right here.