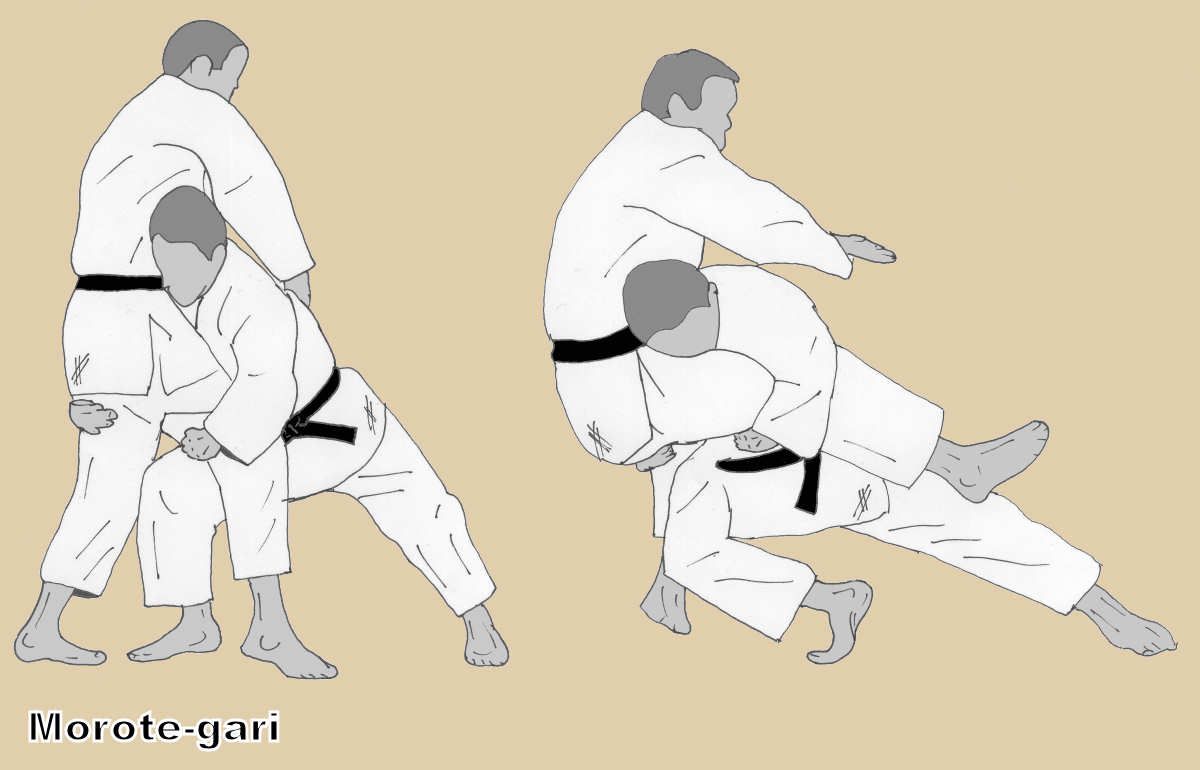 This move involves grabbing the opponent’s leg and taking their base out.  One of the things that make this a difficult move is that there’s a gi where the Uke can easily stiff arm to prevent the Tori from completing the move.

Now that Judo has removed this from their list of legal throws in competition, you’ll most likely see these moves being hit during BJJ matches.

How to Properly Perform a Morote Gari

A well-executed Morote Gari shouldn’t just be about the hands. It is equally important to have a sense of distance plus an idea on how to cut the distance using level change and rushing towards the opponent.

One of the key differences between Morote Gari and your typical double leg takedown in wrestling is the fact that there is no fabric that your Uke can grip on if you are doing wrestling. On the other hand, the gi material can serve as a way to counter the shot.

To be able to address the grips, it is crucial to be actively grip fighting when doing Morote Gari. Rarely do you get to successfully go for the double leg when you have someone who has grips on your collar and triceps. Or perhaps, you want to hit the Morote Gari even before the Uke gets to establish a grip. But of course, this isn’t always a realistic scenario.

Next, you want to lead with your dominant side. If you are right-handed, you want to have the right leg as your lead leg. To execute the Morote Gari, you will have to change your level and shoot. Be sure that your back is upright. As for the hands, you want to grip at the back of the knee rather than on the hamstring.

And also, you need to consider the distance between the Tori and the Uke. The effective range for a Morote Gari is an arm’s length. If you can’t touch your opponent’s shoulder, it means that you are a bit far from the opponent telegraphing your shoot making it easier for the Uke to stuff the shots or even perform his or her version of a throw.

There are a number of defenses and counters that you can expect if you go for a Morote Gari. One counter that can be done is to do a stiff arm creating distance between the Tori and the Uke. This can provide a window of opportunity to the opponent to perform a foot sweep or simply just wheel body and reverse the throw.

If you were able to go for a shot, a common counter by the Uke is to sprawl to be able to get the hip away from the Tori. This also gets the legs out of the way while placing the entire weight of the Uke right at the back of the Tori.

There are strategies that can be done to be able to make Morote Gari effective. First, it is crucial to never telegraph your attempt to perform a double leg takedown or a Morote Gari against an opponent. You can combine it with a number of  Ashi Waza or foot sweeps to be able to get the opponent guessing or stepping back.

You also have to play with his or her base to be able to nullify even a grip on the collar. If both have equal grips it is a good idea to bring the posture down to get the opponent to posture up which could give you an opportunity to shoot and get closer to the hip.

If your opponent sprawled out, does it mean that you’ve already failed to get the throw? In reality, you can still fight for the legs and get the complete the sequence. In some instances, it’s an opportunity to also go for a single leg takedown before capturing both legs to resume the Morote Gari.

There are also different types of entries that you can try if you are going for a Morote Gari. For instance, you can stick to the conventional method of changing levels and closing the distance. However, another option is to simply slide with both knees until you get to connect your chest to your opponent’s hips.

Why Use Morote Gari?

There are reasons why it is a practical takedown and why it is typically among the first ones taught in BJJ. Morote Gari doesn’t require complicated mechanics, unlike other moves. It is also something that has a high likelihood of injury in case you failed to secure the throw. Next, a Morote Gari is also something that can be used across different martial arts. Nowadays, it’s common to see judokas transition to BJJ or even in MMA.

If you are going to simply rely on Morote Gari, it can be a problem considering the fact that grip fighting can also be difficult in Judo. In addition to this, you also have to consider how much energy you have to use every time you’ll have to go for a shot. Unless you have superior cardio, Morote Gari won’t be as effective during the later minutes of the match.

Next, you rarely get to practice Morote Gari in a Judo school considering how it has been banned by IJF in tournaments. In fact, IJF has been criticized heavily by a lot of judokas worldwide for this rule change. Even grabbing one leg with both hands, it is still classified as a Morote Gari and is forbidden.

Morote Gari is a move that is effective when your opponent doesn’t have grips in the collar. In addition to this, you can also do this to catch the Uke off guard when he or she failed to stiff-arm and create distance between you and his hips. But of course, given the fact that you need to cut a good distance between you and your opponent, this is a tricky move to execute even in BJJ tournaments where this is allowed.