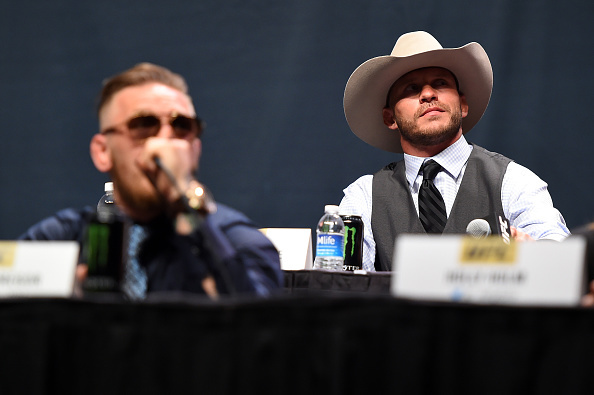 Making the Grade is a new feature on MMA Sucka where I’ll be grading upcoming cards, events that just occurred, big fights and much more. Today, we’re going to take a look at the fights for Saturday night and grade UFC 246’s PPV portion of the card. UFC 246 features a huge contest between Conor McGregor and Donald Cerrone.

Grades are given under various criteria including potential for violence, name value, anticipation value and what the fight means for the division going forward. Anytime McGregor is involved, it’s a sense of heightened awareness. Whether you love him or love to hate him, he’s the sports biggest star and his participation in an event makes it a must-see event.

Cerrone is also responsible for some of the most entertaining fights in the UFC. So the two of them together are going to be special. Let’s not get ahead of ourselves though, we’ve got four other fights to grade before the main event.

Anthony Pettis (22-9) comes into this fight having gone 4-4 in his last eight fights. He’s in a pattern of wins one, loses one, wins one, loses one and it’s not been good his ability to climb the rankings or find any footing within the lightweight division. He does, however, bring a unique set of standup skills to the Octagon. Pettis’ fights are typically really fun to watch.

Carlos Diego Ferreira (16-2) is a really talented fighter who enters this contest having won five consecutive fights. He trains at Fortis MMA which produces a ton of quality fighters. He has good standup and that makes this potentially an explosive contest.

In terms of rankings, neither man is ranked in the top ten, but the loser is going to really struggle to find any momentum going forward. Pettis can’t take another loss at this point, and despite five wins a row, if Ferreira loses he won’t find his way into the rankings.

I like this fight to kick off the PPV segment of the card. It could very well produce a knockout or stoppage and will likely be fireworks. This gets a boost in terms of grading also because Pettis is a former champion and that adds some additional value to the bout.

This is another interesting bout, as both fighters are ranked. Gadelha is ranked number six in the UFC strawweight division while Grasso comes in ranked number eleven. Gadelha has been in there with the best of the best and most of her fights are against the elite of the division. Grasso is stepping up here in a big way, after losing her last fight to former champion Carla Esparza.

Gadelha (17-4) has been in wars with the best of the best. She’s lost twice to Joanna Jędrzejczyk in championship fights and lost to another former champion in Jessica Andrade. Her other loss came at the hands of Nina Ansaroff who has won four of her last five. Gadelha always shows up in good shape and ready to go. She’s a high-pressure fighter and can fight both standing and on the mat.

Grasso (11-3) entered the UFC with a perfect record and has since gone 3-3 inside the Octagon. She’s a young, talented fighter but has not done a great job establishing any momentum. A loss here against Gadelha could see her headed back to Invicta to find her footing.

I think in terms of grading this fight, it’s a little bit lackluster for a PPV main card. Gadelha is a great fighter, and on paper, she seems to be too much for Grasso. The fight could well go the distance and be a bit of a boring scrap. Time will tell.

This fight is a little bit of a head-scratcher to me. Olenik is ranked 12th in the heavyweight division and Green is unranked. Neither of these heavyweights is doing anything special of late, and the fact that they occupy this spot on such a big card is puzzling.

Olenik (57-13) has a ton of experience, but not all of it is positive. He’s lost two consecutive fights heading into this clash and is 2-3 in his last five. Everyone knows about Olenik’s legendary squeeze and his chokes are nightmare-inducing.

Greene (8-3) was a competitor on Season 28 of The Ultimate Fighter. He didn’t win but he’s been a mainstay on the roster since. He’s 2-1 since his victory on the finale but lost his last fight to Sergey Pavlovich via first-round knockout. He is an interesting character and is pretty entertaining but he doesn’t belong here on the main card.

This fight likely won’t go the distance and maybe that’s why it’s on the PPV. You’d have to think either Olenik wins via submission or Greene gets the TKO. It’s just not a compelling fight in terms of meaning, name-value or interest.

This is a good fight between fighters both ranked in the top five of the featherweight division. Naturally, it only stands to reason they aren’t fighting at featherweight, right? Yep, this is a clash at 135 pounds. That notwithstanding, this is a fun fight between two durable and talented fighters.

Holly Holm (12-5) is a former champion and a talented fighter. Her striking is top-notch. She’s a former professional boxer and his kickboxing is dangerous as well. You can ask Ronda Rousey how her head kicks feel. She’s consistently in title-contention so anytime she makes the walk to the Octagon it’s a big deal. Her ability to dish out punishment makes her fun to watch.

Raquel Pennington (10-7) is much better than her record would indicate. She’s won five of her last seven. Her two losses during that span came against former champions Germaine de Randamie and Amanda Nunes. There is absolutely no shame in losing to Nunes who is undoubtedly the best female fighter on earth. Pennington showed tremendous heart and courage against Nunes and her corner took some heat for not stopping the bout due to the punishment Pennington absorbed.

This is a compelling fight, between talented fighters. It’s got an impact on future title fights and will undoubtedly be a classic contest of skills and fighters who are ready to perform at their best. I’m excited about this fight, and it’s my favorite for the fight of the night.

What can be said about this fight? It’s a clash at Welterweight between two guys who have traditionally fought at lower weights. That said, it’s going to be fun while it lasts. These two have been on a collision course for a long while. They’ve had press conference run-ins in the past and are just polar opposites in terms of personality. McGregor might be a deplorable human being, but he’s a talented striker and the most polarizing man in the sport.

McGregor (21-4) was the first champ-champ but gets knocked for never having defended one of his titles. He won the featherweight championship and never defended it and then moved up to lightweight and simultaneously won that belt as well. Again, he never defended it. He split a pair of fights with Nate Diaz and lost a boxing match against Floyd Mayweather. In his last outing, he was dominated by Khabib Nurmagomedov and was forced to tap, something he’s now done in each of his UFC losses.

Cerrone (36-13) is always ready, willing and able to step into the cage and throw hands. He never backs down from anyone, and fans absolutely love him for it. He’s an adventure junkie and lives life on his own terms. His career features periods of consecutive wins and losses. He has lost two in a row heading into this fight. Wins and losses don’t seem to matter to Cerrone and his fans. It’s about getting back into the cage and living life on his terms.

I can’t wait to see this fight. I’m going to be cheering for Cerrone to stop McGregor and that’s due in large part to the fact that the Irishman is pretty unlikeable by and large. That said, he brings eyes to the sport in masse. Nobody can match his draw power and it’s going to be a blast to witness.