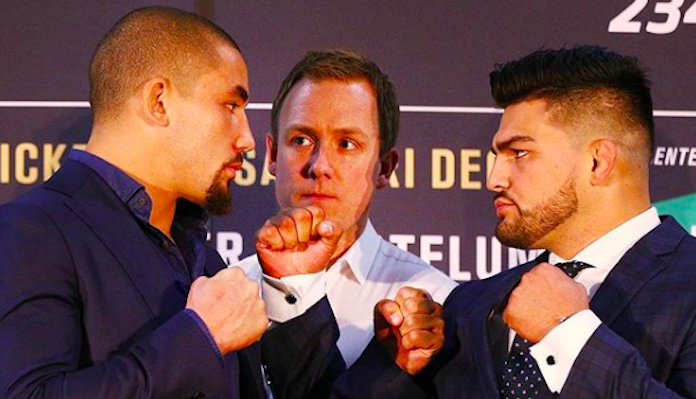 UFC middleweight contender Kelvin Gastelum has opened up about Robert Whittaker’s performance against Israel Adesanya at UFC 243, calling it ‘disappointing’.

Gastelum was speaking to MMAFighting during the recent Dominance MMA media day event as he gears up to face Darren Till at UFC 244 in New York City. The Ultimate Fighter 17 winner is coming off the back of his own defeat to The Last Stylebender which took place back at UFC 236 in Atlanta, Georgia.

In a war that many called the Fight of the Year, Gastelum came up short in a unanimous decision defeat. Two months prior to that, however, he was scheduled to fight Whittaker himself in Melbourne, Australia — only for things to fall apart as The Reaper was forced to undergo emergency surgery for an abdominal hernia of the intestine and a twisted & collapsed bowel.

In regards to Whittaker’s showing at UFC 243, Gastelum had the following to say:

Do you think we’ll see Robert Whittaker and Kelvin Gastelum fight in the future?