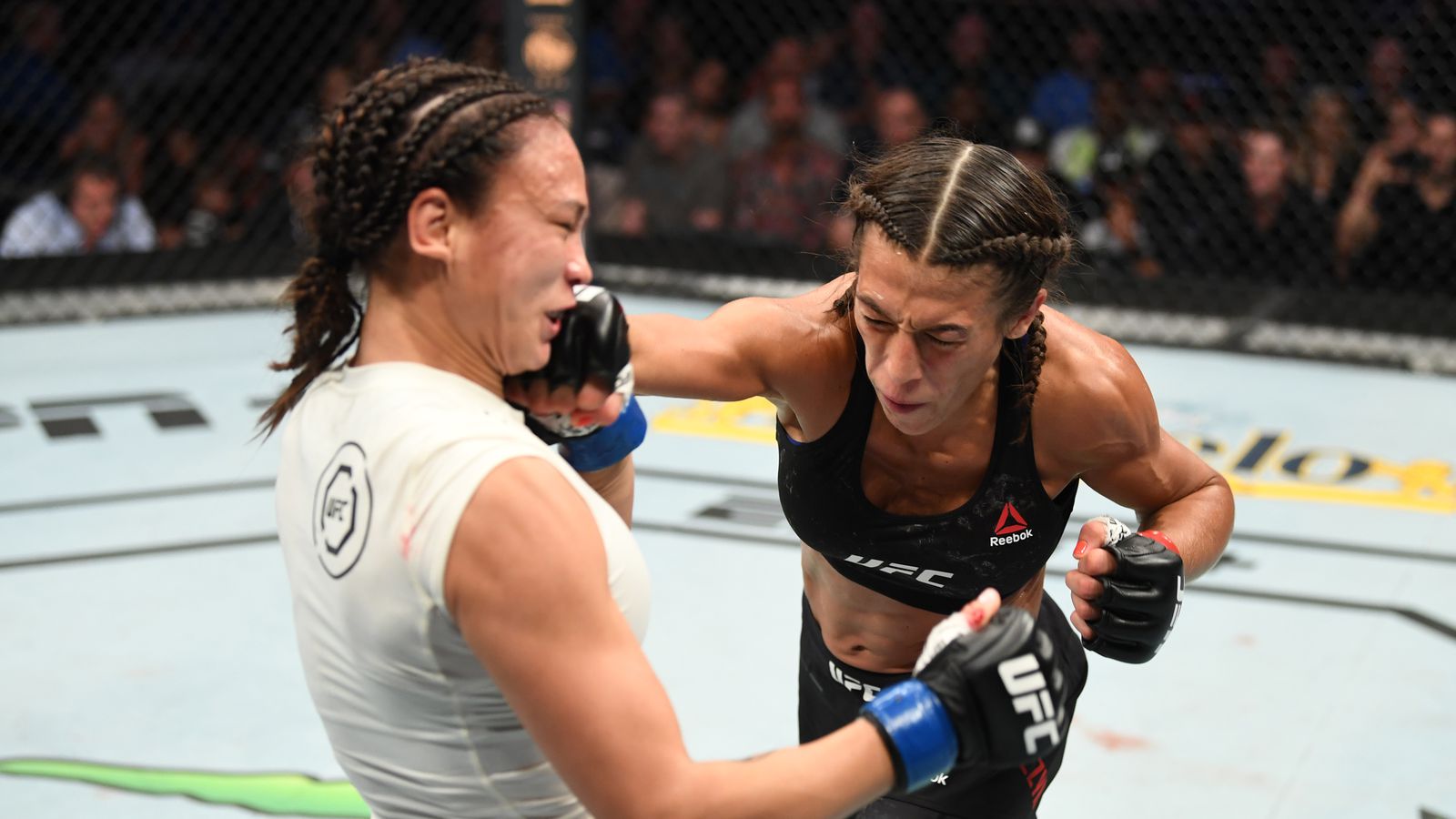 Joanna Jedrzejczyk and Michelle Waterson faced each other in a women’s Strawweight clash tonight (Sat., Oct. 12, 2019) at UFC Fight Night 161, which took place inside Amalie Arena in Tampa, Fla., streaming online via ESPN+. In an excellent showing, Jedrzejczyk picked her opponent apart.

Jedrzejczyk opened the second with some accurate low kicks. More and more hard low kicks landed for Jedrzejczyk. Waterson tried to fire kicks of her own back, but Jedrzejczyk was building up quite a lead with her low kicks. Waterson slapped a high kick off her foe’s head. Good jab landed for Waterson, but a takedown attempt was stuffed. Back in the clinch, Waterson landed a couple good elbows. Hard 1-2-1 drew a single leg takedown from Waterson, but Jedrzejczyk defended easily along the fence. Jedrzejczyk spun her foe into the fence and bloodied her nose with punches. Jedrzejczyk delivered some hard knees to the body. Snappy front kick rocked Waterson’s head back. Low kick, counter combo, low kick scored for Jedrzejczyk.

The third round continued with another barrage of low kicks from Jedrzejczyk. Good body kick answer from Waterson, but it was countered by yet another low kick. Waterson pushed forward but only ate a hard combination and low kick. More low kicks from Jedrzejczyk prompted a takedown attempt from Waterson, but Jedrzejczyk took the back in the process and tried to jump on the neck. Waterson defended and nearly wound up in a Japanese necktie, but she was able to survive and get back to her feet. High kick from Jedrzejczyk glanced off the head. Jedrzejczyk largely landed kicks at will, feinting one kick before slamming home another. Out of nowhere, Waterson found her way to the back during a takedown attempt and was threatening a rear naked choke! It looked tight, but Jedrzejczyk smartly pushed up on the arm and kept the submission as a neck crank rather than choke. Jedrzejczyk escaped the back entirely and did her best to pay Waterson back for the attempt, releasing a big combination before the bell.

Jedrzejczyk’s foot looked broken at the start of the fifth, but it did not affect her movement or strategy. Four punch flurry scored for Jedrzejczyk. Jedrzejczyk switched Southpaw again — now likely explained by the foot injury — and jumped into a hard knee. The fight moved again to the clinch, where Jedrzejczyk reversed position and landed another knee to the mid-section. Once more, Waterson attempted a body lock takedown and was able to take the back in the process. Jedrzejczyk secured the two-on-one grip to defend against the choke and slowly peeled Waterson off her back. Stiff jab landed for Jedrzejczyk, which also served to deny a spinning elbow attempt. Jedrzejczyk scored another combo before moving into the clinch, where she looked to take the back as the final round ended.

On the whole, this was pretty much a perfect performance from Jedrzejczyk. Outside of Waterson’s pair of back takes, Jedrzejczyk was in complete control the entire time, and it’s only due to Waterson’s toughness that the fight lasted five rounds.