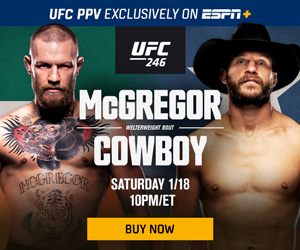 “The Notorious” Conor McGregor returns to the Octagon for the first time in more than a year to take on the legend Donald “Cowboy” Cerrone at T-Mobile Arena in Las Vegas on January 18. The bout is McGregor’s first since his title challenge at UFC 229, whereas Cerrone is coming off three ‘Fight of the Night’ bouts in 2019.

UFC 246: McGregor vs. Cerrone will take place Saturday, Jan. 18 at T-Mobile Arena and the main event will stream live nationally on Pay-Per-View, exclusively through ESPN+ in the U.S. Preliminary fights will air nationally in English on ESPN and on ESPN Deportes (in Spanish) starting at 8 p.m. ET/5 p.m. PT with the early prelims simulcast on UFC Fight Pass and ESPN+ at 6:15 p.m. ET/3:15 p.m. PT.

Elsewhere on the main card, former UFC champions Anthony “Showtime” Pettis and Holly “The Preacher’s Daughter” Holm look to reestablish themselves at the top of their divisions. On the prelims, rising star Maycee “The Future” Barber gets her first top-10 test in veteran Roxanne “The Happy Warrior” Modafferi, and a pair of hard-hitting featherweights square off when “Super” Sodiq Yusuff puts his undefeated UFC record on the line against Andre “Touchy” Fili.

See below to find out how and when to watch and purchase UFC 246 in the USA and Internationally: