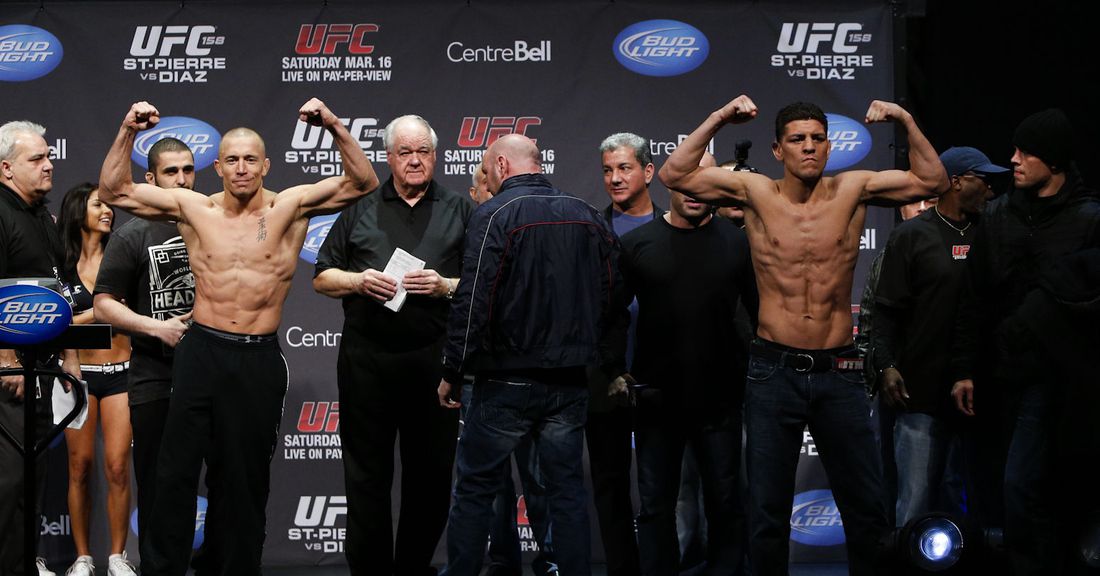 Even when Georges St-Pierre and Nick Diaz were in different promotions, a clash between the two seemed inevitable and their feud is still one of the most talked about in MMA history.

St-Pierre would successfully defend his welterweight title against Diaz by unanimous decision at UFC 158, sweeping the scorecards, but Diaz has long been interested in a rematch despite competing just once since he and “GSP” shared the Octagon.

This past Saturday, Nick’s brother Nate Diaz made a successful return from a three-year hiatus himself by defeating Anthony Pettis at UFC 241. Post-fight, he called for a bout with Jorge Masvidal and then later during an interview with ESPN, he did some campaigning for Nick, saying that St-Pierre should come out of retirement for a rematch with the elder Diaz brother.

St-Pierre was asked about the callout in an interview with Chael Sonnen and he stated his disinterest in signing up for a bout with either Diaz brother.

“I think [Nick Diaz is] gonna hate me until the day I die, it’s unbelievable,” St-Pierre said with a laugh. “Look, I know he doesn’t like me and he looks to get me all of the time, but I genuinely like the guy to tell you the truth. If I were to see him in a situation of trouble and I would be the only person that could help him, I would go help him. And I don’t think it would be the other way around.

“I don’t know what to say. He’s one of my biggest adversaries. Even if we only fought once, we’re kind of very different personalities and I think that’s why the clash of the personalities makes it very interesting. But I’m retired now, I don’t want to go back and fight Nate Diaz. I wish him the best of luck in his pursuit of the title, if that’s what he wanted to do. But I don’t want to fight his brother Nick Diaz. It’s not interesting for me. There’s nothing I can gain from that. The risk is not worth the reward.”

St-Pierre, 38, has said that if he ever returns it would be for fight with unbeaten UFC lightweight champion Khabib Nurmagomedov. However, he admitted recently that even that bout is of little interest to him anymore.

The only reason St-Pierre wanted to challenge Nurmagomedov was to add another chapter to his already inimitable legacy, something that almost no other opponent, including Nick Diaz can provide.

“It’s been done,” St-Pierre said of fighting Diaz again. “Not only that, even if it would have been done, but it would be some sort of reward in terms of legacy or anything. There’s nothing good that can come out of it. Even if I win, I think the odds will favor me, people will make me the favorite for the fight. They will expect me to win and if I lose it will be a complete disaster. I don’t want to put myself into another training camp, all those sacrifices of a three-month training camp for that type of fight.

“It’s not interesting, it’s not worth it for me.”

Other than brushing aside Nate Diaz’s suggestion, St-Pierre was effusive in his praise of Diaz after seeing him fight again at UFC 241. He was impressed with how Diaz presented himself and with how he conducted his business in the Octagon.

“He’s an amazing character because he’s so authentic,” St-Pierre said. “He doesn’t care about what he says and he’s a very authentic guy. Now it’s the Conor McGregor era and you see a lot of guys try to mimic other guys that are more successful in terms of their platform. They want it to become bigger and it doesn’t work for a lot of them because they’re not authentic, but Nate Diaz is very authentic. He’s a unique person, a unique character, and that’s why people love him so much.

“He’s so authentic and what a comeback. After three years, I was not expecting that. I think he looked better than he ever did, it was amazing.”