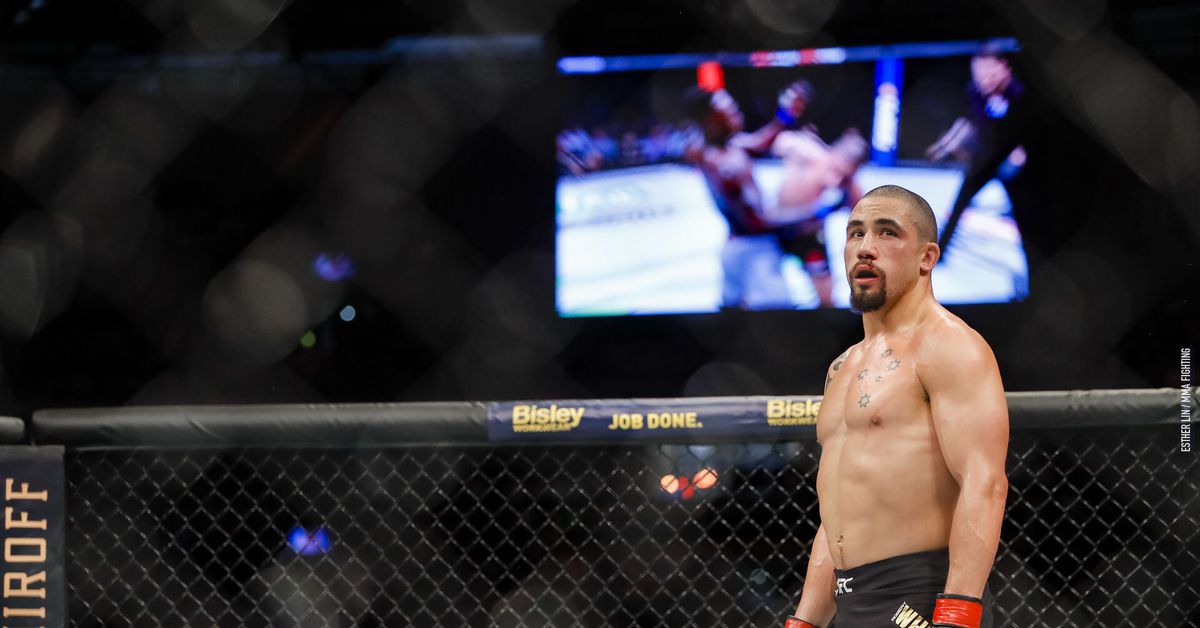 Adesanya is undefeated, at 18-0, has an exciting style, and as shown by his elaborate entrance at Marvel Stadium in Melbourne, Australia, is looking at more aspects of being a star than just performing in the fight itself. He also followed a fight of the year candidate in his decision win over Kelvin Gastelum on Apr. 13, with an exciting win over a very worthy champion in Whittaker.

The economics of the UFC business have changed greatly, where the they don’t depend as much on big stars, like they did until this year. But when it comes to combat sports, the interest level to the public always depends on those few fights a year that capture the attention of sports fans who don’t watch fighting week-in and week-out.

Right now, the UFC has two fighters who fit that bill that can draw the public in. The obvious one, Conor McGregor, has so much money he’s not rushing to fight and doesn’t have the leverage he once had on UFC to get gigantic terms. Jon Jones is the other, and the key name when it comes to the elevation of Adesanya’s career. McGregor has a number of potential opponents, so that isn’t an issue. Jones is lacking in that category at this point, particularly since Luke Rockhold lost when he moved into the heavier division.

For the latter reason, with Adesanya’s win, plus the fuel added with Adesanya and Jones having words with each other, that would appear to be the biggest non-McGregor fight UFC can put on.

The fight is intriguing, with the question of Adesanya’s speed and striking skill against the versatility standing, along with the size and wrestling ability of Jones. The reality is the gap of 20 pounds from middleweight to light heavyweight is one of the worst in UFC, as it’s really more like two weight classes than one. Three of the middleweights who were the top guys in the division for years, Rockhold, Chris Weidman and Ronaldo “Jacare” Souza, are all making that move. The jury is out on the latter two, but that size difference was clearly a nasty lesson for Rockhold.

Making such a fight will give Adesanya the biggest spotlight possible to take him the next step up with the public, but also puts him at risk of a bad loss risking the spot he’s already established.

If we look back at history, the closest situations, with champions moving up, include Henry Cejudo, McGregor, Daniel Cormier, Amanda Nunes, Max Holloway and B.J Penn. As it turned out, in those cases, the lighter fighter won the title in four of the six cases. McGregor did lose moving up to 170 against Nate Diaz. But in none of the cases, and that includes Penn challenging Georges St-Pierre and clearly losing, and Holloway losing to Dustin Poirier, did it hurt the marketability of the smaller man. Penn became a bigger star because of the buildup of the second GSP fight. McGregor wasn’t hurt as a star by his loss to Diaz, as it ended up building up a second huge fight, and right now, a third huge fight would be a possibility. Holloway feels like the same level of star, but he would be the only one who didn’t appear to appreciably benefit.

What also helps this fight is Jones not having a great contender to face just yet. Johnny Walker, the most intriguing prospect, is a few wins away and needs to be tested against higher ranked guys first, while Thiago Santos, who is not a big name but fought Jones close on two injured knees, is out after knee surgery.

Still, the beauty of the UFC being guaranteed its PPV money is that while there is less pressure financially to put on shows monthly that will sell big to the public, they also don’t have to rush a big fight to meet financial projections.

If Adesanya wins a few more fights, a Jones fight would be that much bigger. On the flip side, in such an unpredictable sport, every fight is a heavy risk when it comes to ideas for fights down the line.

But for Adesanya to make the leap from champion to mainstream star, the major steps are exposure, clicking with the public, and usually that comes from being part of a major fight. He’s got a few strong contenders at middleweight, is significantly outsized at light heavy, but for him to break out as the company’s next great star, Jones is the one opponent who affords him of that chance immediately.

Let’s look at how Fortunes Changed for Five stars of Saturday’s show.

ISRAEL ADESANYA – The new middleweight champion scored a decisive win over a proven commodity, leaving no controversy as to whether or not he’s not just a champion but a top-tier champion.

Adesanya clearly understood the lay of the land, as he immediately poked at Paulo Costa (13-0), the clear top contender, who was sitting ringside watching the fight. Costa is the clear next contender, with Yoel Romero (13-4) and Jared Cannonier (13-4) both right behind. It is on the early side for Jones, but that fight should be a goal for 2020.

ROBERT WHITTAKER – Whittaker, after dropping the title, noted that he was only 28 and is going nowhere. By drawing 57,127 fans to Marvel Stadium with Adesanya, Whittaker proved that he’s a huge star in Australia, and if he gets an impressive win or two, a second fight between the two should be just as big.

The winner of the Nov. 2 Madison Square Garden fight with Kelvin Gastelum (15-4) against Darren Till (17-2-1) would make for the best next opponent, along with Cannonier.

DAN HOOKER – Hooker (19-8) established himself as a major player in the deep lightweight division, with a clear decision win over Al Iaquinta (14-6-1) in a manner that makes him a viable opponent to any of division’s top stars. He asked for Dustin Poirier (25-6), who responded negatively, thinking he could get a fight with McGregor. But coming off a loss, if McGregor is going to fight, there would be several seemingly in front of Poirier at this point.

The best next opponent is Donald Cerrone (36-13), since Cerrone always wants to fight and doesn’t turn away from young fighters. Paul Felder (17-4) would also make sense.

AL IAQUINTA – What Iaquinta has going for him is that people can see his attitude, that he’s always game for a big fight. But the loss to Hooker was a bad one at this point in his career due to division depth. But he’s always viable for a fight with Cerrone who would be a fight people would be excited for. Two other potential opponents would be Alexander Hernandez (11-2) or Edson Barboza (20-8).

SERGHEI SPIVAC – Spivac came into UFC at 9-0 with nine finishes, and eight in the first round. Then heavy hitter Walt Harris put his lights out in 50 seconds, and many figured Tai Tuivasa to do the same.

Instead, Spivac completely outwrestled Tuivasa the entire fight, and finished him in the second round with an arm triangle.