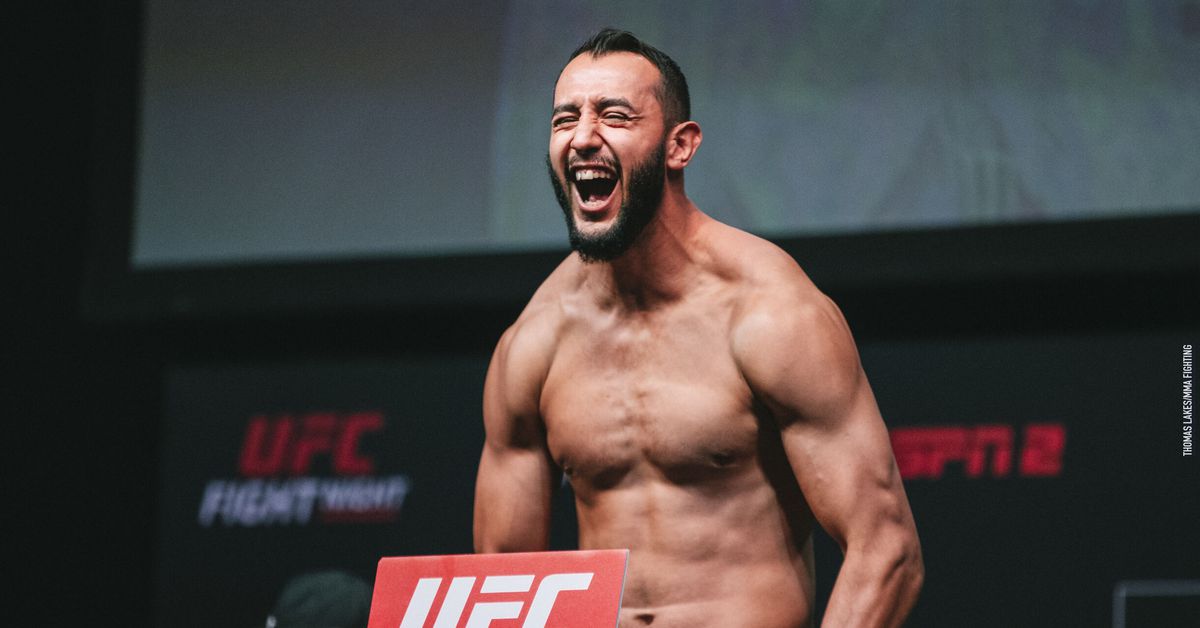 Dominick Reyes knows he finally has Jon Jones’ attention, and he’s ready to sign a contract to make their title fight official.

On Wednesday night, Jones released a message on Twitter declaring that Reyes was the opponent he wanted to face in the next defense of his UFC light heavyweight championship. The decision apparently came down to Reyes or fellow light heavyweight contender Corey Anderson, who’d just dispatched Johnny Walker via first round TKO this past weekend at UFC 244.

Reyes spoke to MMA Fighting on Thursday and gave his reaction to Jones’ declaration that they will be fighting sooner rather than later.

“I wasn’t really surprised,” Reyes said. “I was like all right, now we’ve just got to get a contract. I live my life step-by-step. It was like beat [Chris] Weidman, check. Get Jones to fight you, all right cool. Now actually sign the contract. That’s the next step. It’s another little barrier I’m getting over.

“I don’t really celebrate until after the fight, especially with this guy. I hope he makes it to the fight. It’s a big concern of mine. This guy’s a liability. So we’ll see.”

Immediately after he finished former UFC middleweight champion Chris Weidman back in October, Reyes saw Jones downplay a potential fight between them while saying he had “nothing to gain” by facing him.

Now a few weeks later, Jones appears ready to book the fight, but Reyes isn’t going to start a training camp until he has a signed bout agreement in his hand.

“He’s really turned into quite the troll,” Reyes said about Jones. “That’s all I’ve got to say about that. He goes online just to get a raise out of people and then he does completely different from what he says. I think he’s doing it just to mess with people to be honest.

“I’m ready to go. We’ve just got to get that contract now, sign it up and champ camp begins.”

Whether or not Jones changed his mind between those two separate messages on Twitter, Reyes knows he caught the light heavyweight champion’s attention from the first day he arrived in the UFC.

“This is the thing I’ve known about Jon, I’ve been on his radar since I came on the scene,” Reyes said. “He’s been knowing. He’s just been keeping an eye on me, not really talking about me, but keeping an eye on me. He knows what I’m capable of. He knew this would be inevitable.

“For me it’s like I knew this sh*t all along. I’m like the old Nate Diaz — ‘I’m not surprised motherf*ckers’.”

As far as the timing goes, Reyes sustained no damage in his first-round TKO against Weidman, so he’s ready to begin preparations for the Jones fight immediately.

In a perfect world, the undefeated light heavyweight contender would love to make a quick turnaround to face Jones in early 2020 on the same night a certain Irish superstar is expected to return to the Octagon.

McGregor previously announced his intention to fight on Jan. 18 with Donald “Cowboy” Cerrone as his rumored opponent but nothing has been inked just yet.

It’s still unknown if McGregor’s fight will become official in time for January, but Reyes likes the idea of meeting Jones sooner rather than later, although he’s obviously willing to wait for the title shot so long as that’s what happens next.

“Either way is fine with me, I just need to know,” Reyes said. “What day’s it going to be? March, April doesn’t sound too bad. I have a birthday in December but I have no problem sacrificing my birthday, Christmas, New Year’s and all that for my shot at Jon.”

Reyes has long considered himself the person best suited to not only give Jones his toughest test to date, but finally hand the longest reigning 205-pound champion in UFC history his first legitimate loss.

What makes Reyes so confident he can accomplish what fighters such as Daniel Cormier and Alexander Gustafsson have failed to do?

Reyes confirmed that his management team has been in contact with the UFC about the Jones fight, and now he hopes it’s a matter of time before a deal becomes official.

“We are on it,” Reyes said. “My manager is the best in the game, we’ve got Tiki Ghosn. We’re good. He’s not a rookie to the game at all. I’ve got heavy hitters in my corner. We’re doing our thing.”