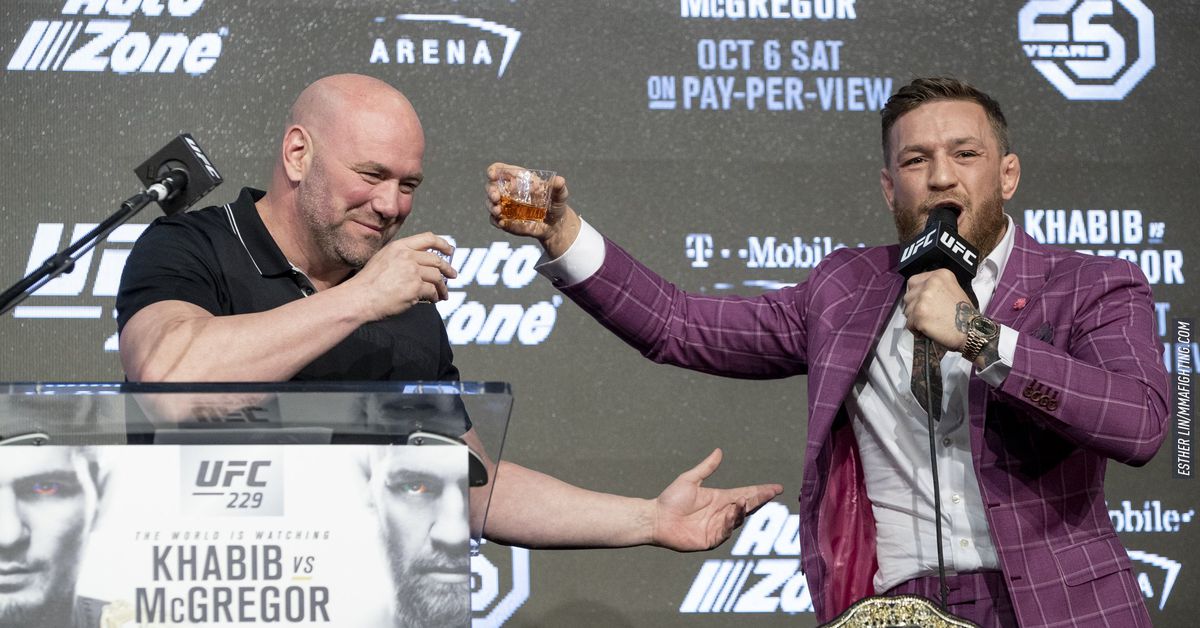 Conor McGregor has been clean and sober for the months leading up to his return at UFC 246. That wasn’t the case in the days before he last set foot inside the Octagon.

The former two-division champion revealed recently that he was consuming alcohol throughout his training camp as he prepared for Khabib Nurmagomedov. He said he was even drinking during fight week as he got ready to face the undefeated Russian.

“A couple months ago, three, four months ago,” McGregor told ESPN when asked about the last time he consumed alcohol. “I was drinking on bleeding fight week with the last one.”

McGregor, who owns his own brand of whiskey called Proper No. 12, can’t say what led to such reckless behavior before arguably the biggest fight of his UFC career. He just knows it was probably the least responsible way of handling himself before such a huge event.

“I had this venom in me or something,” he explained. “I don’t know why. I had people holed up in a hotel from that part of the world. I would ring [them] and arrange a fight. So they’d come from the hotel down to the gym and have a full-blown fight, no head guard. A fight. I’d win.

“We’d have a war and I’d win, knock the guy out and then I’d go off and celebrate, and then I’d come back in three days.”

The poor decisions McGregor made leading to that fight may have affected his performance. He lost in emphatic fashion when lightweight champ Nurmagomedov submitted him with a rear-naked choke in the fourth round.

As disastrous as that fight was, McGregor says he wouldn’t erase what happened in that training camp, because if nothing else, it taught him a valuable lesson he’ll likely never forget.

“You learn something from everything,” McGregor said. “I learned a lot about myself through it. Don’t get me wrong, the work was great. It’s not like I was coming into the gym being lazy and half-assed. It was almost too intense and too serious and working too hard in the gym, and then not working hard enough outside it. Cause that’s a big part of it as well.

“You’ve got to be focused outside, because cause then the next day rolls around and if you aren’t focused when you left the gym, then it’s time to go back, you’re not as sharp. You’re not as fresh. You’re not as eager to be there.”

McGregor claims it was that same vicious circle that continued to haunt him throughout that training camp before his loss.

“Eventually I just didn’t want to be there,” McGregor said. “Then I’d get there and I’d have the scrap, and then off I’d go again. Everything’s a lesson. Some parts of it were enjoyable. I do love a good scrap. I’ve just got to stay focused outside the gym. That’s it.”

It’s been a much different dynamic this time around.

McGregor has worked closely with head coach John Kavanagh to structure his training schedule to ensure the focus remains on Donald Cerrone and the fight coming up at UFC 246.

“I’m not going back there,” McGregor said. “I’m in a great spot now. That’s it. I’ve made mistakes. I’ve been man enough to admit them and correct them, and that’s what I’ve done.

“I might not be perfect, but with a good sleep and a full belly, I’m damn close.”