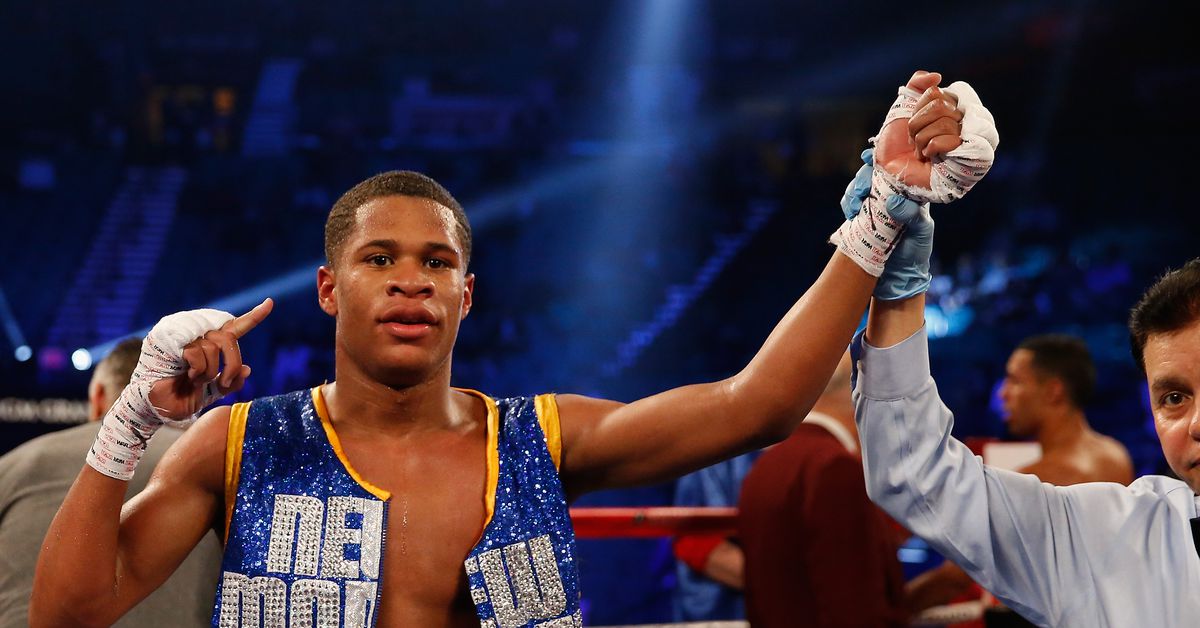 If there’s any boxer right now who should be on your radar as a future long-term superstar, it’s Devin Haney.

In Friday’s Matchroom Boxing on DAZN main event in New York’s MSG Theater, the 20-year-old Haney (23-0, 15 KOs) became the WBC interim lightweight titlist with a TKO win over Russian prospect Zaur Abdullaev (11-1, 7 KOs), whose corner stopped the fight after it was apparent their fighter’s face was getting rearranged. His nose might have been broken and his cheekbone might have been fractured by a Haney right hand.

Haney flashed an outrageously good and sharp jab, blasting Abdullaev with excellent counterpunches and lightning quick uppercuts and hooks to the body. It was pure domination, with Abdullaev only landing a few left hooks for his most notable offense. This was a step up in competition for Haney (despite the one-sided odds), and it was not even a contest.

Haney is the WBC’s mandatory challenger to Vasiliy Lomachenko, although that fight almost certainly isn’t happening next (or any time soon). Lomachenko has his sights set on becoming undisputed champion by taking on the Teofimo Lopez-Richard Commey winner in 2020, while Haney is likely to return on the November 9th card headlined by KSI and Logan Paul 2.

This fight could’ve easily been over in the opening round. Serrano’s power was noticeable early as she staggered and hurt Hardy early and did not let up. It looked as if Hardy was on the verge of being stopped, but she displayed her toughness and the referee opted not to call a standing TKO. Serrano continued to keep the pressure on as Hardy was in survival mode after absorbing 38/58 power punches in the opening frame, and through the middle portion of the contest she did make adjustments to be more competitive.

Hardy avoided getting into big exchanges and backing up towards the ropes, connecting with her jab and working well off the counter. Her success would be short-lived, as Serrano took over again from round seven onward, digging Hardy’s body to set up hooks upstairs. The seven-division world champion upped the tempo and sought the finish again, but it would not materialize. A wide unanimous decision for Serrano to take Hardy’s WBO featherweight title, and she has her sights set on unified 135 lbs champion Katie Taylor, in what would be arguably the biggest fight to make in all of women’s boxing.

Kuzmin’s step up in competition did not go as hoped. The former cruiserweight Hunter largely outboxed the Russian and scored a knockdown on his way to a fairly entertaining but clear-cut unanimous decision. Kuzmin landed his fair share of power punches — not as if he was eager to jab — but Hunter was more willing to throw in combos, and he had a clear advantage in accuracy, athleticism, and speed. A hard left hook put Kuzmin on the canvas in the fifth round, but Hunter didn’t sense that Kuzmin was in enough trouble to go all-out for the finish.

The body work and Hunter was quite noticeable as he peppered away that his much bigger foe, and while Kuzmin cracked Hunter with some heavy shots towards the end of the contest, Hunter’s notoriously granite chin was not compromised.

Hunter is certainly one to watch as potentially making a major breakthrough into the top-10 as heavyweight in 2020.