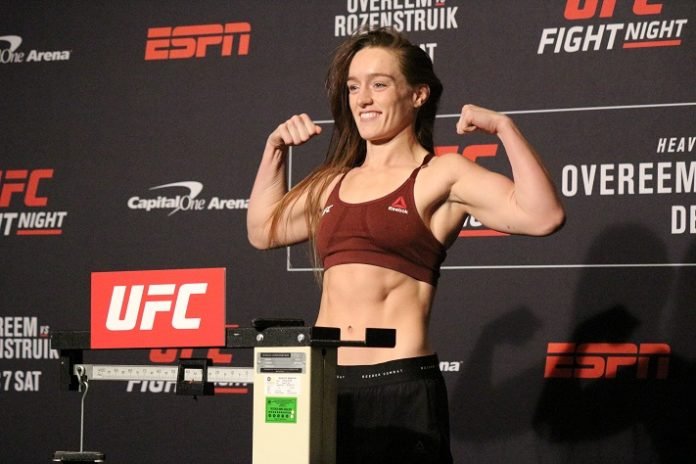 Aspen Ladd and Julianna Pena are set to collide at UFC Columbus.

A key women’s bantamweight fight has been booked for the UFC’s return to Columbus. On Monday, UFC officials announced via social media that Aspen Ladd will meet Julianna Pena at UFC Columbus, otherwise known at UFC on ESPN 8. The event takes place in March, and marks the octagon’s first trip to the Ohio city in over a decade.

ESPN was first to report the bout prior to the UFC’s official announcement.

Ladd (9-1) will enter the fight off a win over Yana Kunitskaya at UFC on ESPN 7 in Washington, D.C. last month. The third-round TKO saw Ladd bounce back from her first career loss, against Germaine de Randamie earlier in the year.

Juliana Pena (9-3) is also coming off a win, against former UFC women’s flyweight champ Nicco Montaño, who moved up in weight in 2019. That unanimous decision win was Pena’s first fight since a 2017 loss to Valentina Shevchenko.

In her time away, Pena gave birth to her daughter. Now back in the mix at 135lbs, along with Ladd, she represents one of the top challengers champ Amanda Nunes has yet to face.

UFC Columbus takes place March 28, 2020 at the Nationwide Arena in Columbus, Ohio. The card is headlined by Jairzinho Rozenstruik vs. Francis Ngannou. The line-up currently breaks down as follows: